Thai cuisine and the culinary traditions and cuisines of Thailand's neighbours, especially India, Malaysia & Indonesia, have mutually influenced one another over the course of many centuries.

According to the Thai monk Venerable Buddhadasa Bhikku's writing, ‘India's Benevolence to Thailand’, Thai cuisine was influenced by Indian cuisine. He wrote that Thai people learned how to use spices in their food in various ways from Indians. Thais also obtained the methods of making herbal medicines from the Indians. Some plants like sarabhi of the family Guttiferae, panika or harsinghar, phikun or Mimusops elengi and bunnak or the rose chestnut etc. were brought from India. 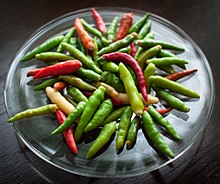 Chilli peppers, originally from the Americas, were introduced to Thailand by the Portuguese and Spanish.

Western influences, starting in 1511 when the first diplomatic mission from the Portuguese arrived at the court of Ayutthaya, have created dishes such as foi thong, the Thai adaptation of the Portuguese fios de ovos, and sangkhaya, where coconut milk replaces cow's milk in making a custard. These dishes were said to have been brought to Thailand in the 17th century by Maria Guyomar de Pinha, a woman of mixed Japanese-Portuguese-Bengali ancestry who was born in Ayutthaya and became the wife of Constantine Phaulkon, a Greek adviser to King Narai. The most notable influence from the West must be the introduction of the chilli pepper from the Americas in the 16th or 17th century. It, and rice, are now two of the most important ingredients in Thai cuisine. During the Columbian Exchange, Portuguese and Spanish ships brought new foodstuffs from the Americas including tomatoes, corn, papaya, pea eggplants, pineapple, pumpkins, cilantro, cashews, and peanuts.

The art of vegetable carving is thought to have originated in the Sukhothai Kingdom nearly 700 years ago.

"The History of Thai Fruit and Vegetable Carving". Archived from the original on 25 November 2015. Retrieved 11 December 2014.